The Undertaker's last fight in his "Yard" !! #ThankYouTaker

Its very hard to speculate that whether "The Undertaker" will ever retire !! Even WWE is not confirming in official statement but also not rejecting the Media speculation about The Undertaker's future yes they signaled about the last ride of the Undertaker when Monday Night RAW was went on the air and "The Voice of WWE" Micheal Cole strengthen the rumors. Mark Callaway best known as his in ring persona "The Undertaker" kept his dominance in the Company from last 27 years. There is no and there may be no guy like Undertaker who will fill the empty of "Fear" in the company now and if anyone believes about Bray Wyatt here then his presence may be felt as a creepy guy not as a "Man of Darkness". When I wrote "The Undertake: 25 Years of Dominance in WWE" on the eve of Undertaker's 25 years in WWE itself, I discussed about his character as a perfect PPV guy, you will find very few guy at the age of 52 to Wrestle and not only Wrestling but Main Eventing a Super Show called "Wrestlemaina" with something around 70+ thousands on hand. The match was also never promoted as a Retirement Match of Taker but was a slight hint only, imagine the reaction of the fans if it would !! I can't say how much this match will help Roman Reigns because he's not some random guy in the Industry he belongs to the legacy of "Anoaʻi family" which gave Legends, Hall of Famers to the industry including every youngsters favorite "The Rock"- Hollywood's most successful actor in current era. Fans of Wrestling now only wants to see Roman Regins to become "Heel" on the cost of Taker, its upto the creative team, writers and Roman to live up on the Fans expectation. 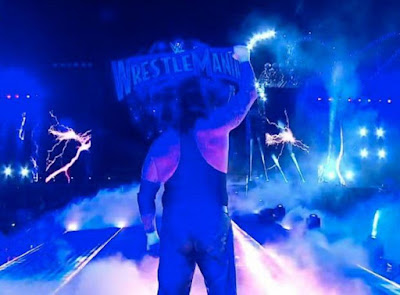 After the lost which Undertaker himself invited, we saw different side of Taker which is not "Dead". After the Match he wear his iconic gloves, hat and trench coat back for the one last time probably, to keep all in the ring to indicate that he's leaving. He took the much deserving appreciation from the fans before to break his character for the first time when he kiss his wife Michelle McCool. Its no secret tat he married to former Divas Champ who is quite active in social site, used to post photos of her Husband as well, but Taker himself never came out from his "On Screen" personality, neither he's in Social Networking Site nor he's in Media its like he himself love to be The Undertaker more then Mark Callaway. Undertaker gave WWE more then anyone can expect from him, indeed after "End of an Era" Match Taker would likes to retire which was also featuring Triple H as his opponent inside "Hell in a Cell" with special guest referee Shawn Michaels who had bit of a rivalry with Taker year before is also a good Friend of H. But WWE make sure to utilize Taker for a long when they bought "Part-Time" contract to deal with many such iconic superstars who can't travel for a regular basis but can impact the business with their brief return.

After 2012 Taker appeared in 5 more matches, before his match against CM Punk was good for Punk's buildup then for Taker in Wrestlemania 29 but death of Taker's "On Screen" father Paul Bearer help the storyline to gone filthy and later the match became good for both as Taker was fighting for the "on screen" revenge of disrespect and CM Punk who in "reality" missed the Main Event of that year's Grandest Stage. Next year Taker was booked to loose against Brock Lesnar to end the longest running successful streak in Wrestling history which gave shocked to many including Taker when he first hear it from the Boss Vince McMahon. Many never thought this would ever happen but it did, McMahon saws a bigger picture after the outcome of the Match. That year Wrestlemania was first time on air in WWE Network and Brock Lesnar at that point was the perfect choice for the company's future prospective. Lesnar went on winning WWE Championship and Universal Championship and is a part of small feuds in his brief appearances. That year Undertaker was for first time looks like he catch-up his age, he got concussion during the initial part of the Match, he was escort out from the Ambulance after match to the local Medical Facility.

Ending the streak by the hand of Brock Lesnar is a clear cut business decision as Brock is a big name not only in WWE but also in MMA background after his first stint, letting Brock to win the 21 years investment is a big price for Brock Lesnar's career. After the streak Undertaker came back again to sell some big PPVs like Wrestlemania 31, Summer Slam 28, Hell in a Cell 2015, Survivor Series 29, Wrestlemania 32, Royal Rumble 29 and his final appearance in Wrestlemania 33. These appearances may call Undertaker's loyalty towards Vince as well since time after time report used to broke about Undertaker's health, some photos in the net of Taker with his friends and fans are suggested that Taker is start using crutches which indicated that he's in no position to take hard bumps and not in his physical best like old his days. Undertaker is a creative guy and took ownership on whatever he accomplished with his character. He's not a Wrestler only with a physique of 300 pounds, something around 6 foot but his great with a promo and the icon he possess. He opted a phenom character in his maximum career with different attires along with Mohawk hairstyle and different styles of beard. During late 90s and Early 2000 he opted a character a best suited on his real life as "Americal Badass" used to define as Cool American guy who rides his stylish custom made bikes.

Its not wrong to say that he's no lesser then a perfectionist in this business who has a great passion and admire towards Wrestling which kept him active in the business for so long. Undertaker used to be a great leader in a locker room as well and guy like him for any young talent is not less then a blessing in disguise. Undertaker may have or may call his day but one thing for sure in whatever age he will be whenever he's require to cut a promo he will do with full authority. He's a part of some memorable matches and crazy stuffs along superstars like Mick Foley, Kane, Triple H, Edge, Shawn Michaels, Hulk Hogan, Brock Lesnar, JBL and many other in different - different era will always be remember. Mick Foley and Kane made a most of the career with Taker being a Partner or "On Screen" Brother and even as a big rival. Undertaker throughout his Wrestling Career may not win many World Championship, may not Main Event many matches but he always was a Franchise player who keeps the one end of the PPV with him. Deadman may be more Human now but his dominance in-front of Wrestling Fans will never "Rest In Peace".
Posted by Anirudha Das at 12:01