Team India: The World No. 1

We saw many era of Indian Cricket, right from Lala Amarnath to Mak Pataudi, Kapil Dev - Sunil Gavaskar era to Sourav Ganguly - MS Dhoni era. Indian Team was "Best in the World" during MS Dhoni's captaincy but throughout his regime we never saw the performance like we witnessed in Virat Kohli era, statement may looks censorial but unfortunately its a fact. This Team got flexibility which proved in the entire season which had long series of 4 Tests or 5 Tests along with Limited Over Games. Start from Zimbabwe series at June last year "Men in Blue" was consistent, yes they fall short in some games but mostly they utilizes their home condition or their opponents of away games quite well. We saw many stars arise during a course of 1 year on different format, at the same time many establish players like Rohit Sharma, Shikhar Dhawan lost their spot followed by injury and poor run with the bat. 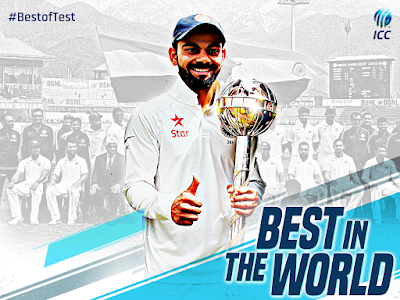 During this season we saw many surprising comebacks like Gautam Gambhir and even Parthiv Patel who returns to National side after 12 years !! These surprised comebacks are made only due to concern in opening department which is yet to overcome, India struggled and still struggling in opening spot and tats why Team saw most number of opening pair in the particular season. Opening spot are always known as a back bone for the Team but the concern not pinned the most because team got dependable batsman like Cheteshwar Pujara who proved to be the next Wall of Indian Team after scoring 2000+ runs in this season, even glamour boy Virat Kohli's bat sparkled this season with back to back 4 Double Centuries against Windies, New Zealand and against England twice. His bat may be was quite against Aussies but he was equally aggressive and led the side the way Aussies likes to play Cricket. 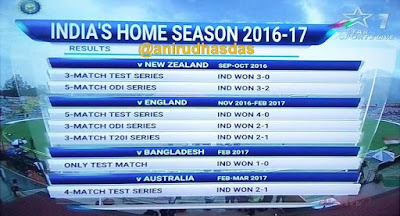 In Modern Era Cricket, Teams become flexible and selecting side as per the formats. Their commitments are increased too since Boards are now concentrating on revenue factor hence increasing more Home Matches despite of FTP schedules. When BCCI announced such a big home series most of the Cricket thinkers start doubting on how India will able to manage such odds which they never faced. Anil Kumble made a valid point after conclusion of 4th Test against Australia tat he always motivates team to focus in sessions rather then in a particular Test Match or in the Series as its all about a Mental game, India some how survived the 1st Test between England in Rajkot when visitors took 7 wickets in 50 overs and had England declared 10 more overs ago then we must have a different Result of the series. Same way when India had a healthy lead of 152 in 2nd Innings it looks like the results is possible but some how Aussies skip through with their brilliance from the bat against our Bowlers tired effort. Although India knows the taste of victory in flat turf when they beat England in Chennai Test but scenario was different in Ranchi Test. 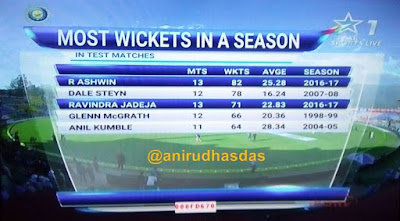 During the start of modern day cricket we saw partnerships of Akram - Younis in 90s then Warne - McGrath era in 20s which used to be a sheer dominance from Pakistan and Australia respectively, against every Team of the World. Indian fans honor to witness the same dominance by Ashwin and Jadeja during this period of time. They equally shared the Spot of World No. 1 Test Bowler for a Week. After Kohli took over the Captaincy, India saw 19 Consecutive Test Wins and the succession of Test Win started from August 2015 against Sri Lanka. Indian Cricket was facing difficult time when India lost their last Test before the mammoth series of Victories before loosing to Australia, Board's Politics, IPL, Failure of Away series was one of the reason people was moving from the game they loved the most. I wrote very critical few words after that match "Does India looking on India's Performance ?" though during this entire time duration Team played in Home Conditions and won Series in Sri Lanka and West Indies respectively. 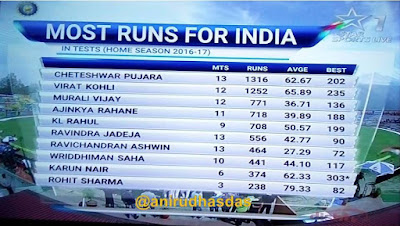 But few matches specially against England where we thought that results will end up as Draw, India pull up the victory in Last few Sessions of a Test Match and this is why I wrote about 4 Day Test Match when "Cricket Intellectuals" and then "ECB Chief" starts advocating about 4 Day Test Match, since Ashwin and Jadeja anchor India's victory at a 5th day when result looks to be impossible. Tats why for the first time in history 2 bowlers of same team at the same season was in the all time list of leading wicket ticker. Ashwin made a history on bowling more overs then anyone in the past as well which also proves the importance of Ashwin infront of his Captain and his Team. During this season India finds another diamond known as Umesh Yadav after Mohammad Shami was out most of the matches this season due to injury. Umesh Yadav played a important role to win the last Test against Australia shown his aggressive bowling, his mental strength and his fitness which allows him to play 12 Matches in this Home Season. 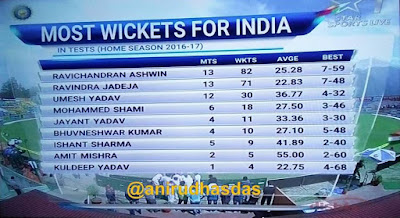 Current Indian Team in Test looks to be quite flexible with Batting and Wicket Keeping, at the same time it lacked seriously in Bowling department despite of some outstanding performance apart from Ashwin, Jadeja and Umesh Yadav. Test Cricket is not only scoring big but also a kind of a fightback like Chetshwar did against Australia in Ranchi when he scored a Double after consuming 525 Balls who also broke a previous record of Rahul Dravid which happens to be Pujara's idol and was "Wall" of Indian Cricket for many Years. KL Rahul, a big find of Indian Cricket despite of Shoulder injury was a part of some outstanding knocks after avoiding some big shots in later innings as precautionary basis though in many occasions he found throwing his wicket when he had a chance to score a big one.

When Opening was a concern for the team, Karun Nair created a small doubt in Team plan by scoring Triple against England in Chennai. This is probably a rarest incident in World Cricket when a Triple Centurion has been dropped from the very next Test Match against Bangladesh and Rahane feels the pressure during his innings of 80 odd runs because both Coach Kumble and Captain Kohli defended Rahane individually before the only Test and who knows the same Rahane will be ask to captaining the side in a "Decider". This team has broke many previous records and set a new ones, they got legacy to maintain and some revenge to take. Nair ended a drought in Test Triple from a Indian after Virender Sehwag, India beat England in India and maintain the record against Aussies. Now how they will do outside is still a question mark but they already made a point that its their fortress and its not easy to beat Team India in India and this Home season is a kind of a statement they got for the visiting Team from now onward.
Posted by Anirudha Das at 11:13