Ever since BJP sweeps Uttarpradesh, a lots of tense faces with very heavy voice start pointing out on a "possible conspiracy" on EVMs to help BJP winning election with a big margin in UP. Poor EVMs never blamed like this before ever since they exists in India, yes its being blamed by non technical politician with their political frames and their frustration was understandable unless like mere political excuse from IITians turned politicians who learns to play technology on their entire academics more then a Engineer from State based Universities, their reasoning should be called as "Shocker" just like any student who feels that he or she deserves a extra marks or a job seeker who expects HR to give him or her a sure shot opportunity despite they never stood as per the expectation. Surprisingly Parties and Faces came to limelight thanks to that EVM only have no courage to challenge their power again but continue to raise finger on EVMs after their defeat. With EVM on center stage they indirectly pointing on a Constitutional Body which is equals to everyone and parties who're questioning somewhat proving the misuse of power on their regime may be ? 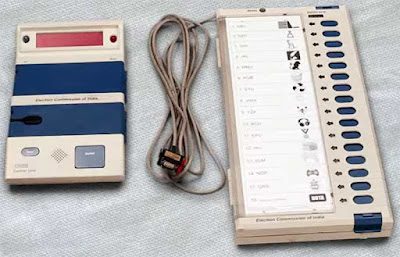 Candidates and Party who appears to be deceive in election should please with their effort though as atleast they haven't got Zero even after their very little effort. They should search those peoples from politics who got zero for different - different reason, one of the reason may be "Booth Capturing" too. Not letting someone to vote or contest for election is a kind of crime and atleast we're now moved away from that but still we're living in a era where Parties thinking to win any election due to its Leadership or Part time issue of "Freedom of Expression". Today's voter bought a change on themselves, they knows the deep inside of every voice and actual intentions behind it, they knows who's representing what ? Today's voter will not going to vote due to occasional leader who request for a change and only criticize the policy of current Government because they have to and tats why after taking a blow on this leaders who asked for a proof on "Surgical Strike" against Pakistan are now condemning Pakistan after they convicted a Former Naval Officer for spying and requesting the Government to bring the officer back safely.

During the assembly election few villages headlined Nationally due to National Media was exploring Uttar Pradesh to cover a stories (which we will get to see only during next General Election), highlighted their boycott on not to vote due to no electricity, no water, no availability of basic needs which is essential to live a basic life, they decided not to trust on anyone because leaders they trusted never seen in 5 years. To save the future of parties and their intellectual needs to start studying a basic figure of "Population of specific region compare to Voters voted to all parties divided by the Votes they received", it will be enough to understand the entire concept of politics rather then researching or understanding the concept of hacking in EVMs because rather then a EVM hack its a hack of a ideology which lost the election. High time for parties to appoint scholars whose leadership are unaware from ground reality rather then a strategic who draws few point to crack the election.

Challenging EVMs may be the only way left to hide the inability to win people's heart but disappoints those who won the election beating a "Waves". Because of this EVM tussle efforts of Captain Amrinder looks very tiny, when Party leadership offered and wanted him to contribute in National Politics he's only wish to won the Assembly Election and become a Chief Minister of the State for one last time led him left everything aside for Punjab. There was a anti incumbency in Punjab due to Akali was in power from last 10 years but Badals winning election proved that their constituency supporting them! Taking a stand is quite a tricky thing but it needs to be care of and if its impacting negatively then it will not benefit at all. Criticizing EVM despite of knowing the consequences and describing the consequences infront of Media will only help someone to create a meme rather then expecting a support. Better if Party and Leadership man enough to accept the defeat and start preparing for the next challenge as to win the election parties and leadership needs to become a "alternative" rather then advocating the alternatives of EVM.
Posted by Anirudha Das at 11:54