Is Ronda Rousey leaving the Octagon for Square Ring ?

For Ronda Rousey fans UFC 207 Live was of great expectation. Finally she was returning back in Octagon after 13 months loosing to Holly Holm, she made her name and fame as women who was kind of ruthless in the octagon ring, hungry to conquer the opponent used to give the best shot to end the night as victorious with full authority, dominate like no other has defense to block her and able to survive. When Ronda lost against Holly in UFC 193, she didn't lost the fight but she lost the dominance which she had for 3 years, its like The Undertaker's Wrestlemania streak which was ended after 21 years. Ronda's this unprecedented performance led her a chance in Hollywood with some big names. All the name and fame she earned was never easy, surely her hard work, dedication and aggression paid the price to her. 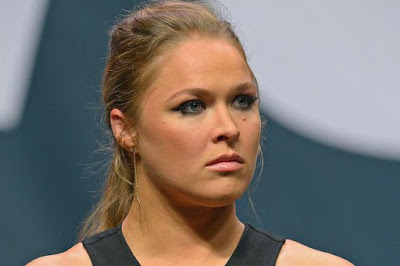 Usually top earning jacks used to start exploring the new payouts. Similarly like Brock who left WWE when he was in peak and moved to MMA made money and name in UFC, but he too though knocked out in his last match against Alistair Overeem and then returned back to WWE where he started his wrestling career though he isn't finished his UFC career. Also once a self proclaimed "Best in the World" in WWE, CM Punk too gives a hand on UFC but lost the bout in 2:14 against Mickey Gall but he has full time contract and company must have a best night for him. Indeed its not only about money but gets a respect back from the business for what you're doing after broken bones, injured body, appearing in a dangerous matches and taking bumps. Hence if one legendary career gets over then other will start as well.

For Ronda WWE Career must be a welcome decision at one hand WWE top Boss including Triple H and Stephanie McMahon was not only excited about her return but must have a pre mature planning too. Like Brock Lesnar, Ronda could Main Event in only Top 4 PPVs too challenging WWE's New Era Women Division or might fight for the Championship as well. But that would be excited to see for which show she would work or if she hold of the any show's Womens Title then how its mirror title stood infront of people's expectation and gain TRP in comparison !! One thing which WWE lacks about is to grab the moment to develop the potential of the division. WWE in past used to promote Womens division aka Divas Division as a tool to gain TRP, they used to focus on beauty and glamour more then ability to rock the ring. Hence in modern time they has no name to shout.

In last 3 - 4 years WWE did rewrite the history aggressively with Nikki Bella to be the longest Divas Champion in history which they still praise despite the title is retired. Last year after Sasha Banks, Charlotte, Becky Lynch debut, all three has quickly cemented their legacy with Becky to win 1 time Smackdown's Women's Championship, Charlotte Flair won Raw Women's Championship for record 4th time hasn't lost a PPV yet and Sasha Banks has won the PPV for 3 times, with this it doesn't mean to make a revolutionary platform which can offer legends but its a process to fill the empty gap which was created due to creative executives no confidence.

Ronda at this moment can give the WWE Team a huge plus who are failing to excite viewers. After a Brand split Charlotte and Sasha both has headlined RAW and PPVs including some extreme matches which no other Women in the past had ever participated in. Also for a big push in WWE Network and gain TRP to crack the Record Breaking TV deals WWE have to offer something boombastic for which they able to proof their own saying that "Anything can happen in WWE", Ronda not only can make a huge crunch from WWE selling merchandise, TV promotions and even at the same time with Movies as well without risking much of her body. In Octagon it may be hard to rewrite the history but in square ring she might overrides all the records made.
Posted by Anirudha Das at 10:30