Deal with #DeMonetisation or Deal with Politics !!

Whether to politize the issue of Demonetisation or not but fact will remain that to bring the life back in Indian economy someone had to make a decision to abolish the old currency with the new one. No doubt that its a beauty of democracy that every tough decision will be challenge in the people's house but when it goes beyond the boundaries or in road then things won't look good for the benefit of the people but looks to be more personally motive then fight for the change. When a Person elected to lead the Country with full majority after doing promise to end the black money and its market and later he did proves his promise with a action in reality then in that step we needs to stand with the motive rather then questioning on the decision. Its not compulsory that every decision have to be perfect and would not have any negative effect also it may not that easy to implement as its in theories but one thing for sure that Black Money and Corruption are the two major links to destroy any Country's Economy and its Growth. With Black Money not only the people are running from the responsibilities to be a participant of Country's Development but also decimating society by parting into two. 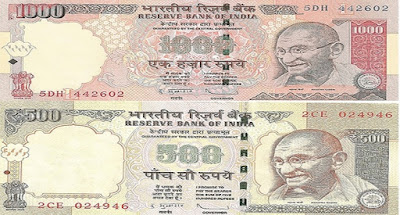 Few people got too much in the society and few are struggling with their basic needs. There is a cruel reality in the society that below poverty level peoples sustenance are drugs to remain alive, it means that forget about two time meal its hard to have one chapati itself in a day thats why consumption of drugs in extreme poverty line are more and small kids and womens are addicted towards it because of unbearable hunger but interestingly at the same time every year crores of rupees of foodgrains destroys during Mansoon because of not having enough shelters, this loss causes Farmers financially as well and literally break them down. Government surely comes forward to cure the trouble but any relief program take its own time and pace before to reach to the end person. Government then charges tax to cure their own loss which hike the prices of every need of a human to survive and at the end of the day poor remain poor which struggled to have food, Government remains busy to settle down the problem before to face another, farmer remain ignorant. But whats the moral of entire cycle ? Had system has the resort of our one basic need we could have see the all new different Country today. Still many states are yet to bring Food Security and moreover Food Security Bill once become the battle of great politics too when its motive was questioned due to its timing.

There is no harm to raise finger, there is no harm to ask question but is it right to oppose every good thing all the time ? I think that is one of the reason why India never being a super power and busying blowing a self made trumpet, when I wrote Can India become a next Super Power ? I tried to bring a very little over politics but reality is that unless politics are happening from open mind and clean heart with a vision in eyes and jobs in hand no one can stop the Country being a Super Power or to become Superior Leader of the World. I think politics's another meaning is dealing with reality as well, you have reason, if you have will to face the challenges and if you got mandate to overcome the odds then you should do it rather then waiting for the time as opportunity won't wait. There is another reason why India never drive the World rather then being driven is because of lack in unity, there is no support but have lots question behind the intentions. Yes question needs to be asked and have to be answered but will be in the cost of image damaging ? Today in the World if you're weaker inside then will be weaker from outside as well.

One of the biggest reason why India's Economical part is still struggling is because still we're far behind to adopt the E Cash facilities relying on Cash based transaction more. Cash in the market and if its not returning back into the source then surely a fall of economical structure, If in any Country Small Denomination Notes start revolving perfectly then surely that Country doing tremendously well in economical zone. Government may trying to bring the big notes from which expenditure increases and it get easily consume but does Government thinking to strengthen the source of Income as well ? Nowhere days getting Rs. 8000 job is very tough and spending Rs. 8000 in a day is very easy, money stuck in because of no job security, not a attractive package hence reason of expenditure is also quite less. If money start releasing in a weekly basis rather then in a Monthly basis then surely people will have more planning and spending as well but there should be a fix minimum amount which a person will get anyhow rather then being on hold in a system.

Today our Finance Ministry may be pushing to bring the economy back but it looks to be a one time process and that too bringing Money for their own dream projects and plannings, this move still not assuring the income of middle class and lower class family. Motionless structure means failure of economical growth which is registering its steady pace and not working towards a big moment. No income and no money led the system dried and cold. Till now Black Money impacted the Country and as mentioned still we failed to adopt the E Cash facility, India's own RUPAY card struggling to create its own place infront of International Giants. Indian Banks though providing International Debit Card but far behind to educate peoples on the usage of it, many still believes to be it as a ATM Card and many still didn't opted it because they don't know how to operate it. We still yet to have "On the Go Era" in the Country. Its not wrong to say that all the E Payment websites started in the Country with a huge cashback offers but when they become famous they brought a huge cut off now it looks like that Companies are happily able to bring investment home from past figure and stats.

To be honest today Country need Political Will, Political Support to secure Peoples life in a better way by creating better opportunities and make sure that everyone got a better lifestyle by that only industries after industries will able to flourish and we have the economical transform. This will be the only way Country will be strong on every pitch and will ables to appeal more infront of the World, its very easy to shout in every corner for everything but will it be helpful for the people who impacted from the blow ? Becoming voice of a voiceless is welcome infact we needed many in every front but becoming voice to cut another voice is quite harmful and painful because it only raise the voices which will override the actual cause. Implementations should made in a better manner but just to fear of this we can't keeps on pushing till it become more worse. Its being said that better face the heat when flames are light rather then when its in full force. If you has strength and power you can create history or you just keeps on waiting. Today we're living in the era of "Now or Never" there is no second and third choice hence its better to do and get criticised rather then get criticised by doing nothing because if intentions are clear then will be applauded but if intentions are wrong then have to pay the price of consequences.
Posted by Anirudha Das at 07:08