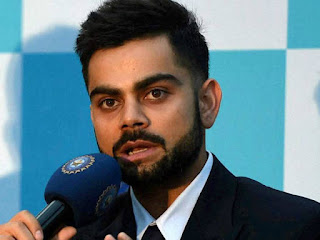 "Test Cricket is real cricket and I never thought I would lead the side 1 day in this grandest format", Virat Kohli may looks hothead or play aggressive cricket but tats the series of words he made politely after he gave post match interview. In a 2 decades of modern time cricket, we saw 3 different captains of India - Sourav Ganguly, MS Dhoni and Virat Kohli. Sourav Ganguly teach us how to lead the side outside India and how to win it. MS Dhoni ensured we won in India by playing some serious cricket and Virat Kohli's era which won all the hearts after India thrashed South Africa out in a 4 match test series by 3-0.


Test Cricket may be the real cricket but need players too who wants to plays it and performs it by considering every goal as a target to achieve. Kohli started his cricket from limited over game later secured his Test Cricket after blistering performance in ODI Cricket. No one can deny the fact that he's a class act at 1 point was holed a record to complete fastest 5000 runs in ODI cricket. Kohli made his name and fame with some magical innings which gave India a famous wins. He may not be a Little Master or Master Baster but he's Kohli 'Name is Enough'. He's will and class let his spot fixed in a side and later named captain of Test side after India's most successful Captain Mahendra Singh Dhoni decides to retire from Test Cricket.

Its not that during Dhoni Era we didn't perform well, we even ended as no. 1 Test Side in the World but we didn't made a significant mark in England, Australia, South Africa and lost a series against England in Home as well. 2014 - 2015 India's Tour of Australia remembered as Dhoni's last ever test series after disappointed performance of India continued. Kohli who led the Adelaide Test of that series showed some resistant, his Century put India inch closer to win that test match although India lost but all eyes was glued on Kohli's intensity and aggression at the 1st Test.

Kohli's record so far is 100% as full time test captain. Beating Sri Lanka at Sri Lanka was kind of memorable series for him and India. Bunch of youngsters which made their mark in the limited over cricket banged in a Test Arena. Ashwin, Rahane, Jadeja are his main weapons which helped him to pass his biggest exam beating South Africa at home, no. 1 Test Side who travels best never lost a Test Series outside home since last 9 years which itself is enough to proof "Proteas" Supremacy so far in modern era cricket. Although Test Series ended with lots of questions regarding pitch but fact and the matter is South Africa lost the match in the dressing room and not on the pitch, when they realise the havoc it was too late for them.

As of now Kohli and his boys made a great impression but they have to be ready to challenge Team outside home because Pitch and Conditions will not favours them they have to adjust their technique and outperform every difficulties. Captain always needs to step up to sail his team if he won't perform then how he gonna motivate his boys ? Captain's innings is must in a crucial situation, Captain also have to see the right combination for the Team - past record and fame won't work create winning combination, Management have to work hard of it. Currently India is no. 2 side of the world have a potential to become no. 1 side too for very long time but only if Team performs outside and not in a "Poor" pitches.
Posted by Anirudha Das at 00:35