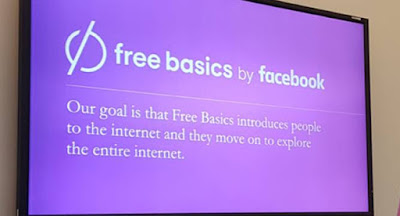 In last couple of days a new theory evolved and that is "Free Basics". Free Basics formerly known as Internet.org till September by Facebook is a nice try to spread a business venture on something like charging tax for subsidies. A kind of Public Trust which is working to expand Internet but no one knows whether it is Non Profitable Trust or Profitable Trust if Profitable then who is owning it ? Free Basics looks very pure and a push to make sure everyone get online. But question arise why would any company will do so ? Whats the benefit of that company to provide a freespace which they owns and putting a constant effort on it to let that thing remains on air. Any online piece need 24x7 assistance, if you can't give then you need a venture for it and obviously it will cost you anyways. So who will bear a cost for Free Basics or Internet.org ? Either the Users or Associate Company, if users then fine okey as they can demand and ask for more since they're paying for a service if Companies then either they won't let others to live or will charge from a platform who doing business by the name of Company's Services.

Business is not a easy game one have to follow a chain or cycle for survival. A Company need a B Subscribers to provide C Company's Service for that A will pay to C and will charge from B. When it comes to 1 or 2 companies then both having lots to claim but when market share divides into many then 1 have to face challenges. Spending and Earning start bothering us and we believes to gain more rather then pay extra because thats why the 1 is in the battleground of the business. No one comes to do business just because they to have to, may be some do to face challenges, may be some do to earn profit by selling it to big fish. Whatever the moral of the particular company or its boss we should understand one thing that no one will ever launch a service without profit, either its a hidden profit or on record profit. They will workout on every aspect of earning hence it can't be consider is for manhood. If want service then we have to learns to pay as well.

"Free Basics" by name can be understandable about a service which either will be Free or provide Free Access in Basic Services. But question arises that how the Selected Services joining the Free Basic Network and what if others wants to join too ? As of now only RCOM providing "Free Basic" as a part of their services means to get Free Service one should become a subscriber of RCOM !! As of now in this vast internet world "Free Basics" providing a very small subset of 38 Websites and its Services. Some are News websites, Some are Entertainment and so on. It means to get a access of those rebel websites one have to pay then whats the ideology of "Free Basics" and "Internet for all" concept ? As I said few websites may be the part of freeware how they join the network and why others are not ? And also what if Competitors decides not to be a part of "Free Basics" ?

One concept coming from Telecos and that is to create their own platform. Airtel already formed "Airtel Zero" but soon be discontinued because in a public pressure, as a telecom provider they could block or throttle the speed of a certain service which may not wants to join the Teleco approved platform. By this purpose of Telecos and Internet Giants will be fulfilled what would the Subscriber will get ? The internet is so big like ocean that you can't restricts it but can be via Service Providers since its a new way to generate revenue. Voice and SMS subscriptions are come down drastically and out of fashion now after VoIP and other Messengers come to play. Just by subscribing Data Pack one can easily join the conversation in a convenience of each other. Telecos main hunt to restrict such services, unless like Middle East they don't want a ban but they want a separate pack for these to increase a number on their balance sheets. Just like Cable TV by which we can watch very specific channels by opting a desire Monthly Pack.

Ideology of Net Neutrality is very simple, treat all the sites and its traffic generation as equal and no to any monoplay in a internet world. Lets everyone get a equal chance to grow and compete in a open virtual space. Internet now become a growth of earning too as indirectly we're helping internet to expand but unfortunately the more broad we thinks its chances increases to become awful as well. Internet is such a wide range of platform that not only Social Networking but it covers Games, Online Streams like Movies, Music, E Papers, Study Materials etc. everything is available online, whatever you need whenever you need is totally free. Just click in or Tap, one small effort and you're in. There is a proverb "Share Knowledge Gain Knowledge" every participant of Internet World is gaining and sharing something here. Few are misusing it also but maximum crowd adopted it for Positive intent only.

Its totally upto our understanding and thinking to choose one path. Either we want Free piece of service or voice up for low cost internet. Remember Free means whatever service either Operators or Online Platform assigned for you works for free and we surely want creative platform first. TRAI as of now asked RCOM to turn off "Free Basics" service and seeking views from the public regarding Net Neutrality till 31st December. Users can send mail to advisorfea1@trai.gov.in and share your thoughts with TRAI regarding what you think about Free Services from a specific Internet Gaint or Telecos, you can use SaveTheInternet.in a online petition is pre ready made by couple of Tech Enthusiasts you can join it and send the pre written text to TRAI and to your Location's MP as well. Remember Internet can be saved by us only and we can't let any Org. or Govt. body to decide independence in a Internet.
Posted by Anirudha Das at 03:47